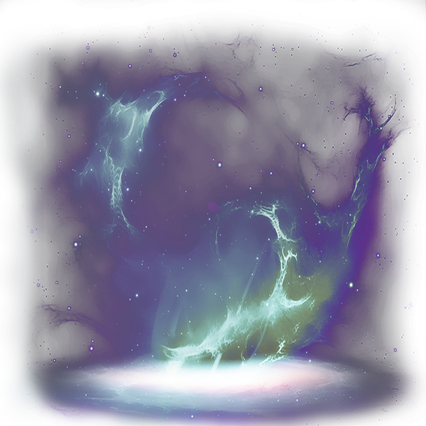 Champions of the Multiverse
Dirk was the first to be sent flying into the air from the attack.  ‘Gargonn’ The Ipslip Dragon immediately launched above the arena after him and managed to catch Dirk on his back.  Together, they reentered the arena, passing through the ethereal gases spiraling above, and to their surprise, the ethereal powers recharged them and amplified their strength!  They descended upon the golden stone guardian at lightning speed and landed a massive combined attack that crippled the guardian in one blow. ​
Inspired by the combined attack, the other men and beasts joined forces.  They also harnessed the ethereal powers and together launched a continuous onslaught against the stone guardians until all five were defeated.  Breathless and victorious, the golems laid crumbled on the ground, but their amulets were perfectly preserved and continued to glow brightly. ​
Forging of Elementeum
Neither men nor beast were able to lay ownership to the amulets on that day, but overtime, through their combined efforts, they began to discover the hidden powers of the amulets.  By reverse engineering the golden white amulet, researchers learned that the ethereal powers spiraling above the arena could be harnessed and forged into a metal which they respectfully called Elementeum, after the first stone guardian. They built a massive forge atop the arena to capture the ethereal powers and create Elementeum directly from the source.  Elementeum quickly became the rarest, most desired metal in all the land.  Besides its use as a new form of currency, blacksmiths within the forge discovered that the metal could be combined with normal items such as weapons or armor.  Through a unique forging process, the items became infused with Elementeum, creating totems of unique powers and effects which boosted the abilities of the bearer.
In order to keep the amulets fully activated, the men and beasts began to hold frequent tournaments between themselves.  Over time, as the wealth of the kingdom grew, massive rewards were offered to the winners of the tournaments.  Rumors of the tournaments quickly spread throughout the multiverse.  Enticed by the power of Elementeum and in search of legendary rewards, new champions from all corners of the Multiverse began to arrive in the kingdom, and the amulets never became discharged again.